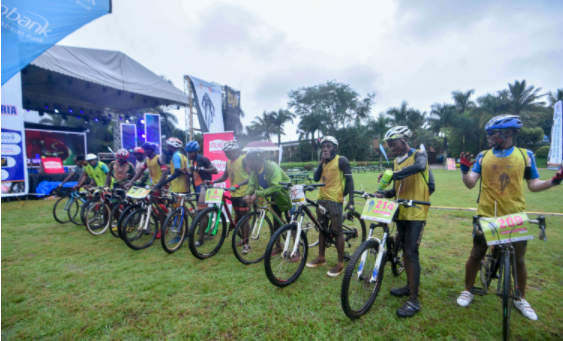 Uganda’s National Malaria Control Program’s strategy is to reduce Malaria cases by 75% over the next 5 years. Drawing lessons from the multi-sectoral approach that saw success in the fight against Covid19, the Program partnered with Rotary Club of Kisaasi-Kyanja to commemorate the World Malaria Day on Tuesday 25th April, 2021 with a national Malaria Awareness 30Km bike ride. The event was the climax of the 96th Rotary DCA that had taken place throughout the week and was graced by RIPPR Yinka Babalola, Governor D9211 Rosette Nabumba and PDG Ken Mugisha, Chairman Malaria Free Uganda and RMPU. 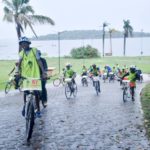 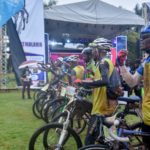 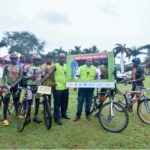 The rain did little to dampen activities, as 153 adults and children showed up in the drizzle to raise awareness of the killer disease. Hon. Jane Ruth Aceng, Minister of Health, was the Chief Guest at the event, flagging off riders and receiving them at the end of the circuit with Mosquito Nets. MPs Hon. Maurice Kibalya, interim Chairman Uganda Parliamentary Forum on Malaria and Hon. Asuman Basalirwa ably represented Parliamentary support in the fight against Malaria.

USAID Mission Director Richard Nelson urged those present to “be the generation that ends Malaria”, counting the US/PMI gains of helping reduce child mortality in Uganda by 53% and lowering Malaria prevalence among children under five by more than 75%. WHO Representative Dr. Bayo Fatunmbi congratulated riders and emphasized the need to take personal responsibility for the Year’s theme Zero Malaria – Draw the Line Against Malaria.