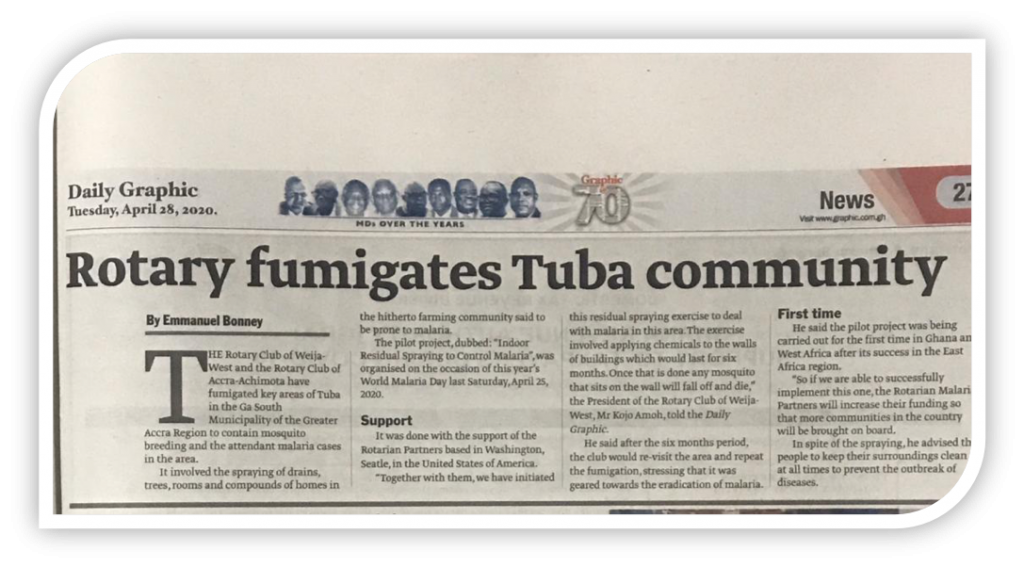 Malaria Partners International approved a grant to the Weija West Rotary Club to conduct indoor residual spraying (IRS) in Tuba, a small community on the outskirts of Accra, the capitol of Ghana.   The walls in homes in Tuba were carefully sprayed with chemicals that kill mosquitoes as they contact the walls.  Residents evacuated their homes for a full day so that the chemicals would not negatively affect them.  I left Seattle on March 10th to participate in the spraying project. Weija Rotary had already begun organizing young men and women of high school level as volunteers in Tuba to educate residents about how the spraying will take place, to take a census so that the impact of the project can be measured and to help on the day of spraying by moving furniture and household goods. They created a sign board for Tuba that advertised this project, connected with local newspapers and TV for coverage on the day of the event and produced t-shirts with the Malaria Partners International logo that volunteers wore.

The grant money, $10,000 from Malaria Partners International and $200 from University District Rotary, arrived on Thursday, March 19th.  At that point, Ghana had begun its quarantine and border closing processes. I personally faced a very tough decision.   Most of what I hoped to do in Ghana was no longer possible.  I had hoped to use my 7 weeks in Ghana to meet with people face-to-face and begin expanding the Malaria Partners International project into the next stage.  Eventually I was repatriated by the American Embassy and arrived in Seattle on March 26th, after a 40-hour trek. Just before leaving I met with Weija Rotary President, Kojo Amoh, Patrick Sorkpor, Community Project Manager and two representatives of the firm that will train community team members in spraying and conduct the spraying. The contractor is local and approved by the National Malaria Control Program.  One of the staff members of the contractor is a Rotarian and is interested in expanding the initiative, perhaps with support of his Rotary club.  On March 27, community volunteers were trained for the day of spraying.  T-shirts were handed out and can now be seen throughout in Tuba.

The President of Ghana issued a declaration that instituted a substantial lock down of Accra  on March 30.   Members of the project team waited anxiously, caught between the lock down and the knowledge that the rainy season would begin any day, making the spraying impossible.  While waiting, Patrick Sorkpor had multiple meetings with government officials in the District where the spraying was to take place.  They were enthusiastic about this initiative. On April 20, the President of Ghana lifted some restrictions and the spraying became possible. Plans were quickly made to do the IRS on Saturday, April 25.   Serendipitously, that was World Malaria Day.  When arising on that Saturday Rotary members saw lightning and thunder in the sky,  but moved forward with confidence.  The sun came out all day.  On the very next day, the rain began, continuing for 8 hours.  The universe provided a window for this to happen.

The District provided a truck with a loudspeaker to guide residents through the spraying process.  Trained volunteers arrived.  Patrick was on site at 6:30 in the morning. The spraying was completed in 150 households, with a population of over 1,000 people. Masks were worn for both the spraying and for COVID-19.  A TV reporter covered the event.  An article about the spraying was published in the Daily Graphic, a country-wide newspaper. A sign board with the Malaria Partners International logo was posted in Tuba. Patrick is receiving congratulations and interest in the initiative from many groups.  He is creating a Gazette in a similar format as the Malaria Partners International Annual Report and when printed will distribute it to every Rotary Club in Ghana. 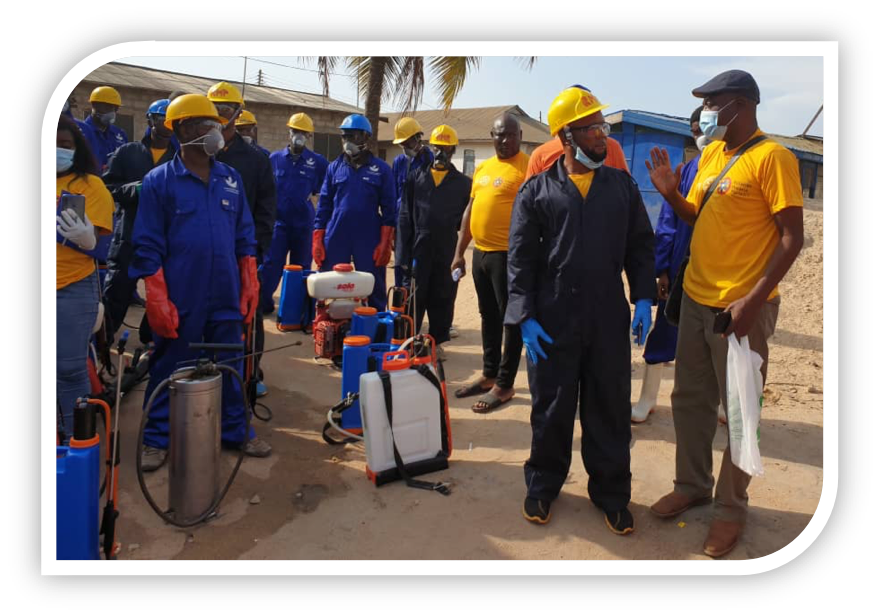