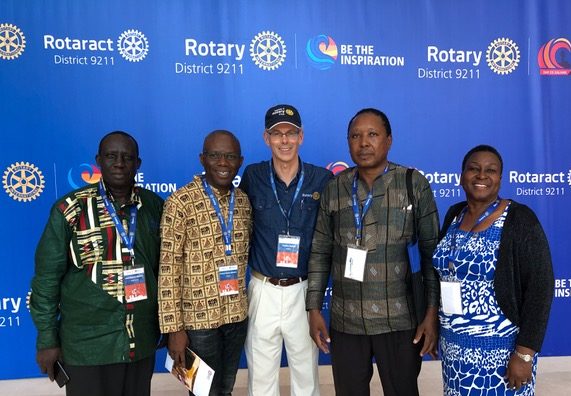 Malaria Partners International has participated in this District Conference and Assembly for four consecutive years beginning in 2016. The Conference has alternated between Ugandan and Tanzanian locations. The District is comprised of all the RC’s in both Tanzania and Uganda. The table below reflects the lopsided distribution of clubs/members between the two countries:

The imbalance is clear and RI has ordered D9211 to redistrict in order to reduce the number of members per district and more evenly balance the two countries. In the proposed redistricting scheduled for 7/1/21, several clubs mostly located south of Kampala will align with a new Tanzanian district that will bring its total to about 900 members, or close enough to the 1,500 member mark that RI considers ideal for a District. The new Uganda District will pick up a few clubs/members in the South Sudan region, but it will inevitably have to redistrict again, perhaps dividing Uganda into two districts. Much of the district hierarchy was engaged behind the scenes in how to roll out this redistribution of clubs/members.

The history of Rotary in Uganda is much deeper and broader than in Tanzania, where under the former Nyerere regime (1960-1985) non-Tanzanian NGO’s were all but forbidden. The prevailing language in Tanzania is Swahili, with English fluency really just among the professional elite. With this history and economic culture Rotary has had difficulty expanding outside of the urban centers.

The primary objective of this visit was to continue to expose the conference attendees to Malaria Partners International, and especially its augmented profile since this 2018 gathering in Entebbe. Instead of spending time as a passive participant in the conference proceedings, I chose to man our extremely well-placed kiosk, located immediately on the flank of the secured entry to the conference hall.

Rtn. Ssebunya Kizza of the Nateete-Kampala Club and who Malaria Partners International has grown to know over the past four years of attending these gatherings, and I were at the booth engaging with passersby and interested District Rotary members. Ssebunya was useful in spotting influential individuals and steering them to our location. I was able to capture photos (and ID’s) of most of the 150 or so who engaged us. We kept a sign-in log of all those that did with name with name and contact information.

(N.B. – DG Sharmila Bhatt invited Malaria Partners International’ers to its hospitality suite at the Hamburg RI Convention – Sun 6/2 6:30 to midnight at the Hafenclub).

I spent much of my time discussing the small grant program, that it involved a formal application process found on Malaria Partners International’s website, that it typically involved a maximum $5,000 grant request though it could include a budget of $10k with the Gates Foundation matching program in play, and that consideration for such grants was outside the normal Rotary Club channels. The Arua grant was clearly on display and we used that as a vivid example of how a small grant could look. One problem with the display, is that it did not include a description or reference to the Katakwi Project, in what would have been a handy topic piece in our conversations with the many Ugandans who visited us. Another useful item, would be to have a glossy card/brochure that was a takeaway showing our mission statement, strategies, and website address.

Unlike, previous conferences we did not push to be on the proceeding’s agenda. Below are photos of several VIP’s that dropped in to visit our location. One friend of ours is DGE Xavier who is a member of the newly formed Malaria Partners International(U). He met with our traveling gang from Seattle last year and implored us to broaden our reach by adding clubs to our support base. We have done that by adding about a dozen clubs.

I took a day to fly via Nairobi to Entebbe where I spent a night before hopping a flight the next day (Monday 4/29) on Eagle Air to Arua for a 24-hour visit. Arua is located near the top NW corner of Uganda (see map below), and nestled close to the borders the DRC and S. Sudan. It is a bustling town of 200,000, though I was told nearly quadruples in population during the day as a busy commercial hub for this region.

The purpose of the visit was to wave the Malaria Partners International flag, especially the one reflecting the nascent small project side of its mission, and assess its small sized effort there. Our project is indeed tiny located in just a couple of small Parishes to the south of town. It has an annual budget of just a little over $6,000 devoted to the distribution of 300 LLIN’s through a couple of small squads of VHT’s. The VHT’s are tasked primarily with visitations to households to instruct on proper bed net deployment and usage, to spot early malaria symptoms, and to direct cases to hospitals. It is notably more focused on the rainy season which while imminent, hadn’t yet struck. There is also a provision for the administration of 2,500 anti-malarial ACT treatments; however, this component lacked an executable in-the-field strategy without a pairing with RDT’s. A further complication is that since the RDT’s represent an invasive diagnostic to extract a blood sample, that the Ministry of Health must certify the VHT’s as suitably trained to administer them (at least that is my understanding). When I asked about this, through interpretation I heard that in fact they were certified, though maybe not officially. The VHT’s are an all-volunteer group and I was further given the impression that some monetary remuneration was necessary to qualify them.

The greeting committee was comprised of Dr. Robert Candia (a dentist and a past President of the RC of Arua), Dr. Dennis Odongo D (Chief Kuluva Hospital Doctor). I visited first the Kuluva Hospital, an old faith-based (Anglican) hospital spread among several stand-alone single- story wards, typical of rural medical facilities in E. Africa. I had the misfortune of arriving in the intensive end of the pediatric section, just as a three-year old girl expired from malaria, although her official cause of death was septic shock from chest lacerations, as her family had practiced sorcery on her in hopes of extinguishing her symptoms. A sobering moment!! And, this wasn’t even malaria season! Her blanket draped body has remained an impressionable idée fixe ever since. The consequences of our work are real!

The death count among under-fives at the Kuluva Hospital from October 1st to April 1st is 15. Obviously, it’ll go up after April is finished and counted. After further touring, it was evident that the hospital did not deploy any bed nets, an observation I made abundantly clear a continuance of this grant would need to address. While the one fatal case rose to the top of those I saw, there were at least four other cases I witnessed of young children either on or just finished IV’s and burdened with complicated malaria symptoms.

We then drove to Ombaderuka, a small parish about 15 km south of Arua. I was greeted by about a dozen recently deployed VHT’s and several children and presumably parents. Through an interpreter, who I understand was also a radio announcer, we plowed through an agenda dominated by “remarks”, including some of my own – as inspirational as I could make them. Following lunch, we visited a nearby second (“Phase 2”) group of VHT’s about half of whom received seven brand new bikes for their household-to-household work. One of the local County Councilors also attended and remarked along with the rest of us. After a night’s stay in Arua at the delightful Golden Courts Hotel, it was off to Entebbe and home.

Following this project trip, I communicated with Royce Gloria Androa, the Rotarian through whom this project was coordinated initially. She was travelling in the U.S. and intends to be in Hamburg for the RI Convention. (By the way, her daughter is a Ugandan Rotaractor and led a project with sweeping impact that will receive the Best 2019 Rotaractor Project Award from RI’s President– see image below)

I suggested to Gloria, as I did to Dr. Odongo, that this small project could be strengthened significantly. This is put forth with the thought that there’s enormous value in needless trip avoidance to the region’s hospitals, most especially when uncomplicated cases can be treated safely in the field. Educate and training on proper bed net deployment and shutting down early any temptations to employ ancient medical practices.