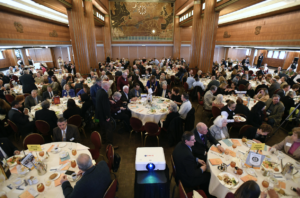 The Rotary Club of Long Beach hosted the annual Rotary Large Club Conference, held in Long Beach February 10-13. President-elects, Presidents-nominees, and Executive Directors representing 53 of the largest Rotary Clubs from the U.S. and Canada attended. Five of Malaria Partners International’s leaders traveled to Long Beach California with the Malaria Director and  Senior Program Officer of the Bill & Melinda Gates Foundation to speak at the Rotary Large Club Conference on February 12, 2019. This Special Edition summarizes their seven presentations and a new video describing the extraordinary opportunity to join together to eliminate malaria.

Rotary Club Contributions To Malaria Projects Will Be Matched 100% 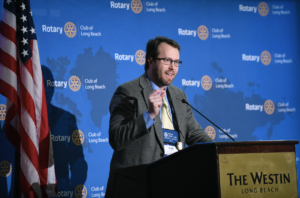 Dr. Philip Welkhoff, the Bill & Melinda Gates Foundation’s Malaria Director, came through Seattle’s snowstorm to join Malaria Partners International for plenary presentations February 12. His keynote commended Rotary members for their mission-driven energy, collaboration and leadership in the quest to end polio.  “Once again,” he said, “Rotary’s expertise and leadership are needed to dramatically impact human health in some of the world’s regions in greatest need.  This time the challenge is malaria.”  He believes this is a crucial moment to lay the groundwork for malaria elimination and that Rotary members have a critical role. Dr. Welkhoff called on the large clubs represented at the Conference, with their legacy of driving change, to join the malaria fight.  “We need the experience, expertise and vision your clubs can bring to ending malaria.  We will match your clubs’ contributions to malaria elimination up to $500,000.  If you blow through that limit, we’ll increase it!”  This announcement was greeted with loud applause. The foundation has made a separate grant to Malaria Partners International for Zambia’s Copperbelt Malaria Elimination Project, which the Large Clubs were encouraged to join.

Large Clubs Asked To Lead Rotary Into The Malaria Fight 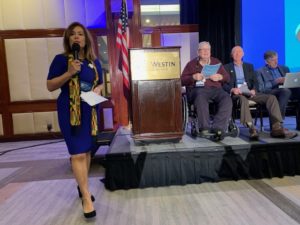 Adriana Lanting, Conference Chair, asked Large Club leaders to consider the impact they can have on children’s lives by combining forces to fight malaria.  Her club pledged $10,000. With the new match and the other matches in a Rotary Foundation Global Grant, Long Beach’s $10,000 commitment will generate $50,000.  With Large Club leadership, the malaria plaguing 2.5 million people in Zambia’s Copperbelt Province can be eliminated. 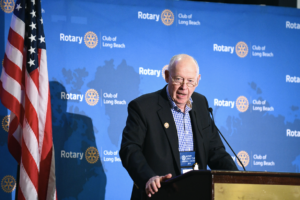 Bill Feldt, Malaria Partners International Board member and leader of the Copperbelt Campaign, described how the projects being designed there will, with Rotary members involved, drive malaria incidence down near zero. Building a comprehensive and highly responsive care network of community-based health workers is the intervention that will achieve this success. Rotary members will educate and mobilize communities to receive into their homes trained health workers they know as neighbors to detect and treat malaria cases on the spot.  They will be equipped with medicines, medical supplies, bicycles and cell phone time to report weekly to health authorities on malaria cases and treatment.  CHWs are also trained to treat diarrheal and other common diseases.  With visits throughout malaria endemic areas, prevention is brought to all children under five instead of only those children receiving care at clinics and hospitals.   To cover the entire Copperbelt Province will cost $2.5 million.  That can be done by 2021. Bill encouraged the Large Club Leaders to join the Malaria Partners International trip to Zambia October 15-23, 2019. The Zambia tour begins in Lusaka on October 15 and ends there on October 23.  The cost will be approximately $2500 based on double occupancy.  Included are transfers. lodging, all meals and beverages except on home stays, motor coach and air transportation in Zambia and gratuities.  Homestays in Ndola reduce the cost by $200.  Click here for more information. 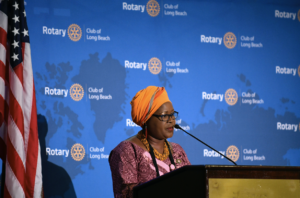 Modestine Kaoma traveled to Long Beach from Mufulira in Zambia’s Copperbelt Province to invite Large Club leaders to partner with the eight clubs there that have formed Rotarian Malaria Partners Zambia (RMPZ).  She asked the Large Club leaders to imagine arriving in the Copperbelt by parachute. Landing in a rural village, they’d be surrounded by subsistence households and meet poor but resilient people.  Malaria is the deadliest disease they face, keeping them from work while taking a financial and emotional toll.   Rotary members there have come together to fight it.  RMPZ was formed to provide international clubs with a strong host partner to join the fight.  Modestine is Co-chair of the RMPZ Board that has representatives of all eight-member clubs.   Its important role in implementing the government’s malaria strategy has brought them onto the National Malaria Elimination Council. Modestine concluded: “Through our nine year partnership with the Rotary Club of Seattle, we’ve learned how large club participation and leadership can energize our own commitment and work for the eradication of this dreaded disease. During that time, other clubs such as San Francisco and Federal Way have played leadership roles in anti-malaria grant projects. As in polio eradication, your clubs have the vision and muscle to bring our dreams of malaria elimination to life.” Modestine brought conference participants brightly colored bags from Zambia.  They contained Malaria Partners International pens, pins, and background information. 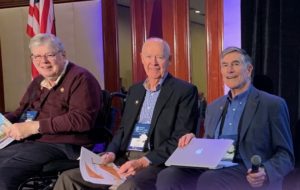 A panel of three Malaria Partners International leaders was introduced and moderated by Steve Crane, a founding Board member who is now retained as Senior Consultant, Strategic Engagement. Steve, who is a polio survivor, said that fighting polio has prepared Rotary members to fight malaria.  We’ve learned that it takes going house-to-house to reach all who need care. That is the key to sustaining malaria gains in Uganda and the strength of the projects planned for the Copperbelt.  We’ve also learned that Rotary members can mobilize grass roots support and advocate persuasively for the government policies and funding needed. 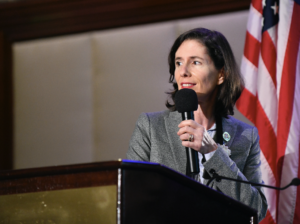 Dorothy Echodu, Malaria Partners International Ambassador and CEO of Pilgrim Africa, leads a partnership with Rotary members working on a major malaria elimination project in Northeast Uganda.  One third of Uganda’s population has malaria, suffering one of the highest rates of malaria transmission in the world. With support from the Bill & Melinda Gates Foundation, the President’s Malaria Initiative and the Peace Corps, the partnership is working with rural communities on a two-phase project. The first phase demonstrated that if insecticide treated bednets are combined with indoor residual spraying and mass drug administration, malaria incidence can be reduced by 85%.  Those gains are short-lived unless there is a second phase to sustain them.  Phase II is preventing resurgence using ‘Integrated Community Case Management’ in which volunteer health workers are trained to test and treat their neighbors.  As affirmed in Dr. Meacham’s presentation, this approach not only sustains the gains, but further reduces malaria to below 4%. 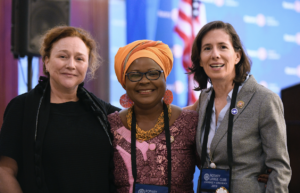 Dr. Diana Measham accompanied Dr. Welkhoff to Long Beach.  She is Senior Program Officer, Strategic Partnerships and Country Engagement on the Malaria Team at the Bill & Melinda Gates Foundation.  Her presentation explained the importance of Community Case Management (CCM), to the malaria fight in Zambia and elsewhere. CCM is made possible by training and equipping volunteer Community Health Workers (CHWs) to diagnose and treat malaria among neighboring families. This approach helps overcome long distances, cost, and cultural issues that can be a barrier to access to clinics and hospitals, leading families to delay seeking care.  In combination with strong vector control through bednets and targeted indoor residual spraying, CCM is having dramatic effects on both malaria mortality and transmission. In addition to malaria, tests are given for pneumonia and diarrhea.  Results are reported on cell phones weekly.  Over three years, this approach in Zambia’s Southern Province reduced malaria prevalence from 33% to under 4% and it continues to decline.  With Rotary large clubs’ support, Malaria Partners International and its Zambian counterpart, RMPZ, plan to adopt this approach for malaria elimination in the Copperbelt Province by training 2200 CHWs.

Rotary members Have a Critical Role 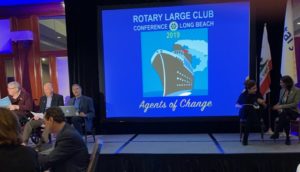 Founding Board member and former Malaria Partners International Vice Chair Jim Moore followed Dorothy’s presentation.  He said her project is a great example of Rotary members as powerful, compassionate strategic partners in international development. They are capable of raising needed funding and mobilizing local communities in endemic, neglected areas.  They can “provide the advocacy, education, organization and sustained interventions needed to drive down the malaria burden and deaths in those communities.” Jim called on Large Club leaders to take Rotary members’ roles in malaria elimination to the next level.  They can do that by joining the partnership with Malaria Partners International and RMPZ in the Copperbelt and bringing other clubs in their Districts on board.  He encouraged them to explore adding malaria elimination to their current work in other countries with trusted local Rotary partners.  Malaria Partners International will help launch and support new projects.

Malaria Partners International’s presentations were outlined in a short video.