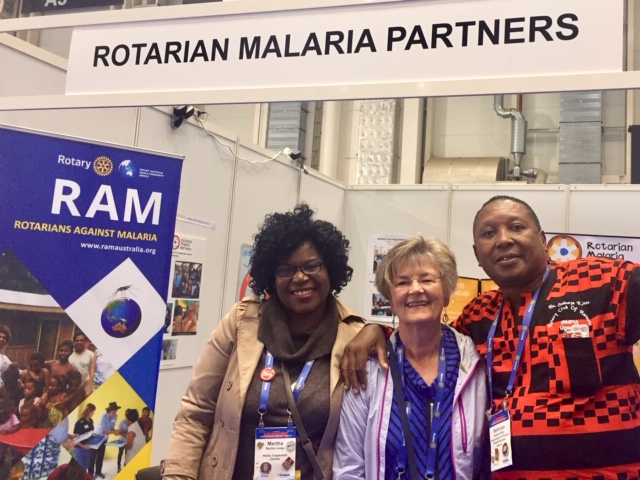 Booth Display: A three panel Table Top Display was used, due to its portability, with the fourth panel provided separately on the wall of the booth.  In addition, panels from the Gambia (see pages below) were also on the wall.  Rotary members Against Malaria (RAM) provided hand out materials and a large poster.  On the last day, RAM explained their Asia/Pacific Area work (Papua New Guinea, Timor Este, Vanuatu, and Solomon Islands). The large clubs of Ann Arbor, MI and San Antonio TX also made  visits to our booth and are very interested.

Meetings with RAM and REMaRAG Leaders

On Monday, June 3, REMaRAG’s designated chair, Ellen Biasi (RC Key Biscayne) held a meeting to determine if there was support for rebuilding this Rotary Action Group.  Ellen made clear in her opening remarks that R.I. would delist the RAG unless it became active and in compliance with RAG guidelines very quickly.  The Group’s mission is the same as that of Malaria Partners International, but it would not initially raise money for project work.   Its focus would be to serve as a coordinating center and advocate for anti-malaria work.  Those present were in favor of rebuilding the RAG under Rtn Ellen’s leadership.  Malaria Partners International is already a life member.

On Tuesday afternoon, June 4, a 90 minute meeting was held with Ellen Biasi, Jenny Kerrison (Director, RAM), Larry Granat, Jim Moore, and Diana Maria (Colombia Anti-Malaria),  and Drake Zimmerman.  The purpose of the meeting was to clarify how our organizations would collaborate to enhance the malaria elimination initiative within Rotary and to avoid duplication of effort.  From Malaria Partners International’s point of view, the concern was that Ellen’s and REMaRAG representatives’ grass tops advocacy efforts in Rotary would duplicate initiatives that Malaria Partners International was already undertaking or would be undertaking.  In addition, for broadening our impact, all three groups need to be communicating with R.I. and Rotary members using the same message—to avoid confusion, dilution of advocacy impact and message overload of key R.I. officers

To that end, Malaria Partners International representatives offered to share the communications/marketing and key influencer contact strategies that it was already initiating.  The need to share the contents of grass tops meetings among the heads of all three organizations was endorsed.  The system for doing that does not yet exist.

With the help of Ssebunya Kizza and Joel Okalany, Drake, Larry and Jim organized a malaria social event on Monday evening, June 3rd, at the Houseboat.  Jenny Kerrison of RAM and her husband attended, as did DGE Bill McElroy and his wife, along with a dozen others.  Unfortunately, in spite of accurate GPS and signage outside the address, several potential attendees (Ellen Biasi, was one) couldn’t find the party and gave up their search.  Bill and Karen Feldt pirated away Martha Lungu and the Muyendekwas for a river cruise (they enjoyed very much), and as a result, the 5 houseboat hosts ate leftovers for the next two days