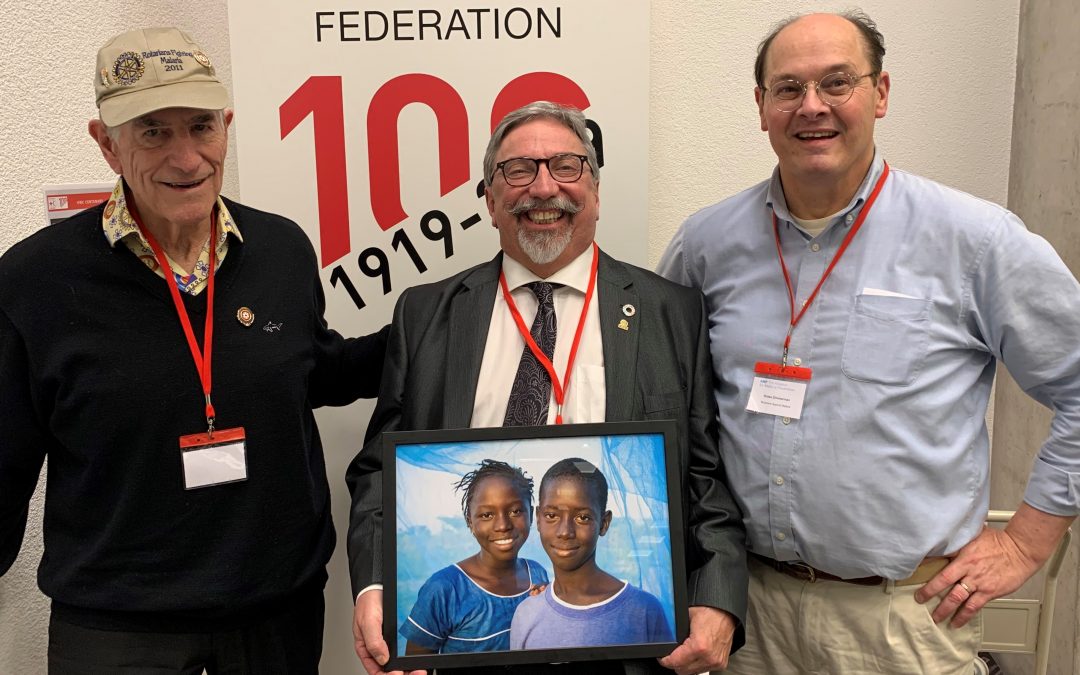 Geneva, Switzerland – Rotarian Drake Zimmerman, helped found The Alliance for Malaria Prevention (AMP) to show how to incorporate treated mosquito nets into vaccination campaigns. Starting with 14,600 nets in 2002 funded by a Rotary Matching Grant, the effort grew to need its own organization, AMP. AMP has trained countries that now distribute over 250 million nets every year. Each year at the annual meeting in Geneva, Switzerland, AMP awards its Top Malaria Prize to groups that have made exceptional contributions to malaria control. Malaria Partners International’ Jim Moore, and Rotarian’s Against Malaria -Global show off the 2020 award with Rotarian Zimmerman, member of both boards.

Zimmerman co-founded RAM-Global and was thrilled Rotarian’s received the award for the unprecedented second time. He explained, “Rotarian’s continue to pioneer interventions in malaria that prove extremely effective. Malaria Partners International trained and funded hundreds of Community Health Workers in Zambia and Uganda. They reduced rates of malaria to near zero. Nets can get rates down to 10-30%, but the question remained, What do we do then?” Rotarian’s reasoned, “If Community Health Workers can lower rates to near zero in areas of higher transmission, like Zambia, we have a strong shot at knocking malaria out everywhere.”

Drake added, “RAM Australia work showed us zero malaria is possible.” Rotarian’s from Australia lowered cases in East Timor from 223,002 in 2006 to 9 cases in 2019, all imported.”That we know the specific and really low number of cases, and can determine that they were all imported, means that we can take malaria to zero. RAM Australia worked with WHO, the Ministry of Health and many others to set up systems to track malaria in Timor Leste. Surveillance is critical so we know when we get malaria to zero. Next up: Can we keep it there, at zero?” Malaria work is all about both innovations and getting the many players working together. An award winning strategy, to be sure.