Malaysia is ground zero for the next malaria menace 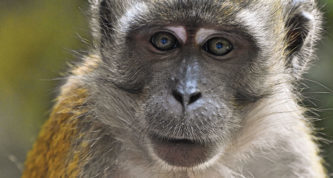 Vinita Surukan knew the mosquitoes were trouble. They attacked her in swarms, biting through her clothes as she worked to collect rubber tree sap near her village in Sabah, the northern state of Malaysia. The 30-year-old woman described the situation as nearly unbearable. But she needed the job. There were few alternatives in her village surrounded by fragments of forest reserves and larger swaths of farms, oil palm plantations and rubber tree estates. So she endured until a week of high fever and vomiting forced her to stop. The night of July 23, Surukan was trying to sleep off her fever when the clinic she visited earlier in the day called with results: Her blood was teeming with malaria parasites, about a million in each drop. Her family rushed her to the town hospital where she received intravenous antimalarial drugs before being transferred to a city hospital equipped to treat severe malaria. The drugs cleared most of the parasites, and the lucky woman was smiling by morning. Malaria has terrorized humans for millennia, its fevers carved into our earliest writing on ancient Sumerian clay tablets from Mesopotamia. In 2016, four species of human malaria parasites, which are spread by mosquito from person to person, infected more than 210 million people worldwide, killing almost 450,000. The deadliest species, Plasmodium falciparum, causes most of the infections. But Surukan’s malaria was different. Hers was not a human malaria parasite. She had P. knowlesi, which infects several monkey species. The same parasite had recently infected two other people in Surukan’s village — a man who hunts in the forest and a teenager. Surukan suspects that her parasites came from the monkeys that live in the forest bordering the rubber tree estate where she worked. Some villagers quit working there after hearing of Surukan’s illness. Monkey malaria, discovered in the early 1900s, became a public health concern only in the last 15 years. Before that, scientists thought it was extremely rare for monkey malaria parasites, of which there are at least 30 species, to infect humans. Yet since 2008, Malaysia has reported more than 15,000 cases of P. knowlesi infection and about 50 deaths. Infections in 2017 alone hit 3,600. 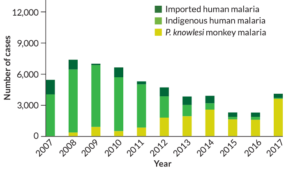 People infected with monkey malaria are found across Southeast Asia near forests with wild monkeys. In 2017, another species of monkey malaria parasite, P. cynomolgi, was found in five Malaysians and 13 Cambodians. And by 2018, at least 19 travelers to the region, mostly Europeans, had brought monkey malaria back to their home countries. The rise of monkey malaria in Malaysia is closely tied to rapid deforestation, says Kimberly Fornace, an epidemiologist at the London School of Hygiene and Tropical Medicine. After testing blood samples of nearly 2,000 people from areas in Sabah with various levels of deforestation, she found that people staying or working near cut forests were more likely than people living away from forests to have P. knowlesi infections, she and colleagues reported in June in PLOS Neglected Tropical Diseases. Stepping over felled trees, humans move closer to the monkeys and the parasite-carrying mosquitoes that thrive in cleared forests.