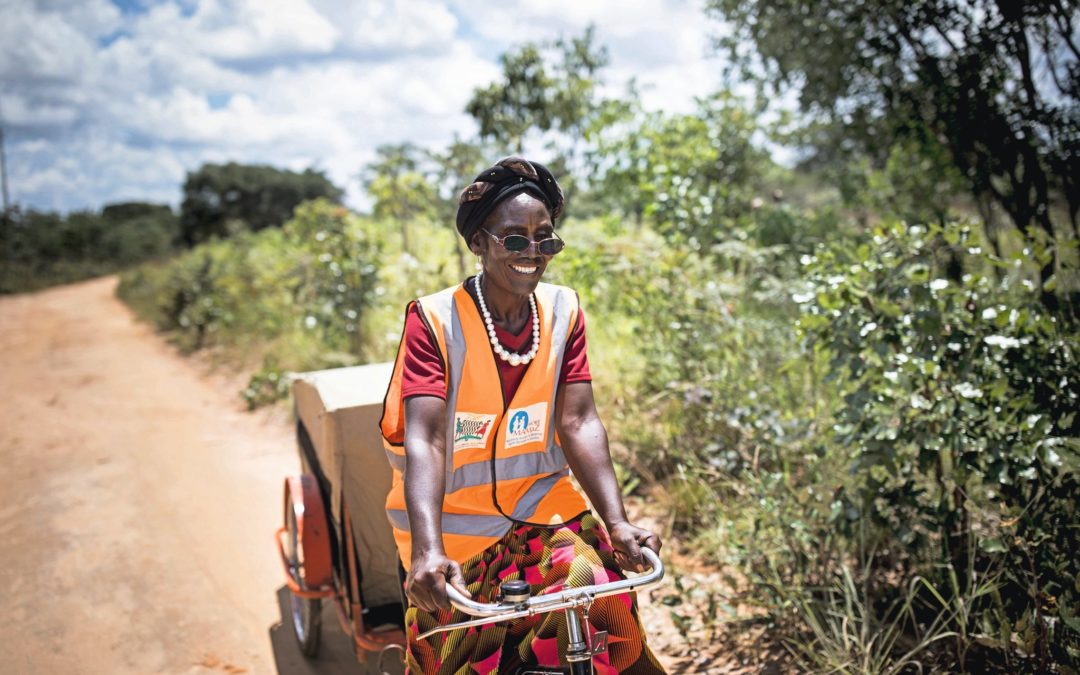 Malaria quickly kills toddlers. But rapid diagnostic tests, a new suppository drug and bicycle ambulances can buy enough time to get stricken children to hospitals. During malaria season, children who live in remote villages are at tremendous risk. When parasites transmitted by mosquitoes swarm into the brain, the disease can kill within 24 hours. Often parents do not realize quickly enough how close a toddler is to death. More than 90 percent of malaria deaths are in children under five years old.

Now, after 13 years of effort, a set of stopgap measures to keep youngsters alive long enough to get them to a clinic has been developed. Initial testing suggests the measures can dramatically cut death rates; in one pilot project in Zambia, they dropped by 96 percent. The most important new element is artesunate delivered as a soft rectal suppository. Artesunate is the drug that hospitals inject into children in mortal danger from malaria infections of the brain. The new version comes in a form that can be given by a village health worker or even a parent.

Rectal administration gets the drug into the blood quickly and avoids the possibility that the child will vomit up the medication. Ideally, each two-dose box kills enough parasites to buy six to 12 more hours for a child to reach higher-level care. The World Health Organization endorsed the idea of artesunate suppositories in 2005, but it was not until February that a version finally won full W.H.O. approval. It is made by Cipla, the Indian pharmaceutical company that in 2001 became the first to make inexpensive generic H.I.V. drugs for Africa. A second artesunate suppository, by another Indian company, Strides, was approved in June. Other advances that help save children with malaria include rapid diagnostic tests, training local health workers to recognize the disease and a fleet of bicycle ambulances.The test gives a diagnosis in minutes with only a finger-prick drop of blood.

The ambulances are metal carts about six feet long and four feet wide that can be made in a local welding shop and attached to most bicycles. A mother and child can ride flat or sitting, and the cart can navigate dirt tracks too narrow for cars. (Motorbike ambulances have been rolled out in India for use in roadless mountain areas and cities plagued by traffic jams, but they are wider and more expensive.) The multipronged program was tested during the 2017-2018 malaria season in a Zambian district where villages could be up to 10 miles over dirt tracks from any formal medical care. It dramatically cut child mortality rates, and in April the Bill and Melinda Gates Foundation released a video describing the program’s success.

An analysis released in August calculated that deaths were 96 percent lower than they would have been without the combination of suppositories, ambulances, test kits and extra training. (The comparison was imperfect, because the 2017-2018 season in the analysis appears to have been more severe than the previous season, and local clinics were well prepared in advance. Still, only three children died, which was far fewer than local health officials had seen before.) The pilot project was supported by the Medicines for Malaria Venture, a partnership founded in 1999 to pursue new malaria drugs, and Transaid, a British charity that works to improve transportation in poor countries.

Donald G. McNeil Jr. is a science reporter covering epidemics and diseases of the world’s poor. He joined The Times in 1976, and has reported from 60 countries.