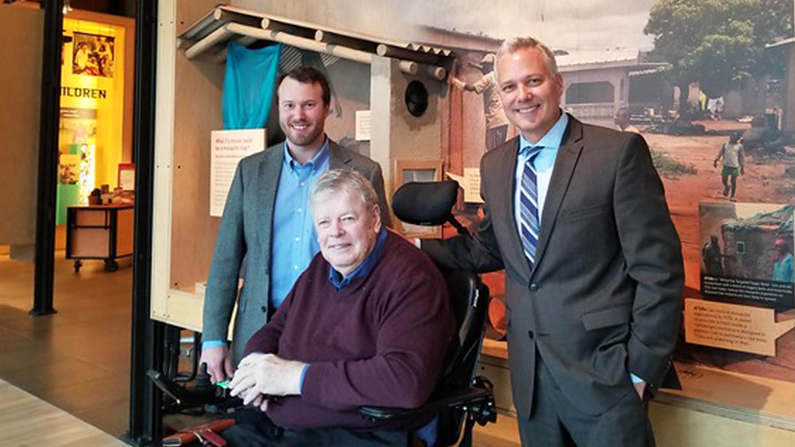 Steve was known for his tireless dedication to the eradication of polio and
malaria. His impact on Malaria Partners International was huge and we will be challenged to fill his
shoes with a leader of such high quality. Steve Crane was born September 18, 1941 in New Jersey, grew up in Cincinnati, Ohio and attended Princeton University. He transferred to and graduated from Stanford University, before attending graduate school at Johns Hopkins University. His business career included increasingly responsible positions at National Cash Register, Weyerhaeuser, Continental Can, American Field Service and the administration of Washington State Governor John Spellman. Before joining Malaria Partners International, Steve worked with small and large international nonprofits and foundations through his consulting company, Crane International.

A multi-sport athlete in his youth, Steve was stricken by polio at age 13.
Though told he might never walk again, Steve demonstrated his trademark
grit and determination by joining the Princeton swim team, hiking, sailing, and traveling the world. Later in life, when post polio syndrome confined him mostly to a wheelchair, he still maintained that high activity level. Steve traveled to Washington D.C. several times to advocate at the U.S.
Congress for continued polio eradication budget support. Past Seattle 4
president, Ralph Munro, said that on these trips Steve was still going strong
after long, exhausting days of meetings. His big smile and booming laugh were engaging and endearing to everyone he met.

In difficult circumstances, Steve was indomitable. On an Ezra Teshome (Malaria Partners International Board member) led polio immunization trip to Ethiopia, he endured the difficulties of non-ADA hotels and the long trip to a rural immunization site where his reward was placing vaccine drops in the mouths of children. In a Dacca, Bangladesh slum, Steve overcame the obstacles of narrow alleys and rocky paths to join the joyous dedication of a new water system. He never held back, he never complained.

Designer of the District 5030 District Grant program. Chair or