As a Board member of Malaria Partners International, (Malaria Partners International), last year I began working with the Rotary Club of Weija West.  Malaria Partners International has had great success decreasing the incidence of malaria in parts of Uganda and Zambia.  I will be working, along with others, to bring our malaria elimination efforts to West Africa.  Malaria Partners International approved a grant to the Weija West Rotary Club to conduct indoor residual spraying (IRS) in Tuba, a small community on the outskirts of Accra, the capitol of Ghana.  The interior walls of homes in Tuba will be carefully sprayed with chemicals that kill mosquitoes.  Residents will evacuate their homes for a full day so that the chemicals do not negatively affect them. Indoor spraying has been a key component of successful malaria elimination projects in East Africa and Ghana.  I left Seattle on March 10th to participate with Weija Rotary and program collaborators in the spraying project. No long lines at the security check. I’m already beginning to see the effect of corona virus. The plane to Amsterdam was only half full so plenty of room to stretch out for the long red-eye flight. I thought I was going on a seven week visit to Ghana.

As I arrived in Ghana the fear of the virus had already begun. The first 2 cases of COVID-19 were identified on March 15th, imported from Europe.  One day as I walked a street a tro-tro driver (mini-van used as a public taxi) pointed at me and yelled “corona virus!”   Some people seem to be afraid of the Seattle Pariah, but mostly not. On my first Sunday I was able to meet with the Weija Rotary Club and a number of Rotaractors who will help with the project. The young Rotaractors will take part in the Tuba project in the census taking. The grant money had not yet arrived.  Weija Club members were enthusiastic about helping with the project.   On this Sunday we were feeling the pressure of the impending rainy season and already wondering how the coronavirus would affect our progress.

Weija Rotary had already begun organizing young men and women from high school as volunteers to educate Tuba residents about how the spraying would take place, to take a census so the impact of the project could be measured and to help on the day of spraying by moving furniture and household goods for residents. Weija Rotary had been busy creating a sign board for Tuba that advertised this project, connecting with local newspapers and TV for coverage on the day of the event and ordering t-shirts that volunteers will wear.

The grant money arrived on Thursday, March 19th.  Weija Rotary continued efforts to organize the public information and advertisement of the project, hoping to begin the activities leading to the spraying on March 20th. But several pieces were not yet in place, including printing of the T-shirts, contracting with a videographer, getting permission from the District government to erect the signboard and contacts with community leaders.  One person, a nurse whose name is Hindi  Adamu, has been essential.  She is Muslim in a largely Muslim community and speaks the community’s local dialect.  (Many of the residents migrated from the North of Ghana, where a language different from the local Twi and Ga languages is spoken).

At this point, Ghana had begun its quarantine and border closing processes.  Flights to and from Europe had been cancelled.   I had rescheduled a flight for April 11th from Ghana direct to JFK and then Seattle.  Large meetings had been banned.  The Rotary District Conference had been canceled indefinitely.  More importantly to most Ghanaians, the football (soccer) games were also cancelled.  But radio and television re-runs of previous games keep all alive. I began facing a very tough decision.   A contact that I knew who worked at the airport was telling me that the airport in Accra was soon going to be closed.  I contacted the American Embassy in Accra and they began sending me messages about potential charter flights out, contracted by the Embassy. Most of what I hoped to do in Ghana wasn’t possible.  I had hoped to use my 7 weeks in Ghana to meet with people face-to-face and begin cultivating future Malaria Partners International projects.

Monday the Embassy contacted me and asked if I was interested in being on stand-by for a flight out on Tuesday.  I said yes!  That flight was cancelled.  Tuesday, I got a notification to be at the airport on Wednesday morning.  I arrived at 7:00 am to find 200 people sitting on the sidewalk waiting to get into the airport.  I went to a table at the head of the line and because I was on the standby list was allowed into the airport.  During the next 5 hours I waited to see if I could get on the plane.  There were about 20 of us on standby.  One was a couple who were returning from Liberia with two young girls they had adopted. Many were Ghanaians with double citizenship who had been visiting home to be with family or to attend to business.

I was the last, or one of the last to board Ethiopia Air Flight 339.  I was escorted to first class on a plane where the seats in first class fold out into a bed.  A good feature for an 11-hour flight to Dulles Airport in Washington, DC.   I arrived in DC at 7:00 pm EST.  Because I did not know when or if I would get a flight to the US I couldn’t book a reservation ahead of time.  Delta, the airline I was working with, had cancelled all flights out of Dulles.  So I booked United and the flight left 12 hours later – the next morning.  Spent the night on a bench in the airport, with unmovable chair arms.  No opportunity to lay down or stretch out.   Next flight was to Denver and there were only 7 people on the plane.  No wonder flights are being cancelled.

I arrived in Denver about 8:30 am MST.   Finally touched down in Seattle at 2:00 pm PST, about 40 hours later. I don’t know the cost of all this.  I had to sign a declaration in Ghana that I would pay whatever the cost of the flight would be, up to $2,400.  If not paid, my passport will be invalidated.  Waiting to see. 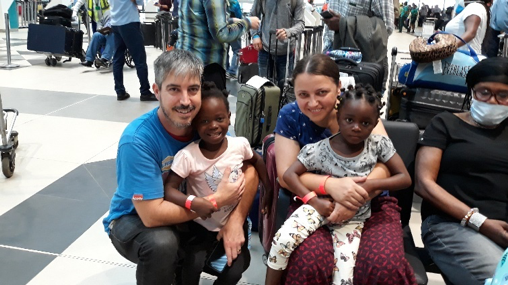 Couple traveling from Liberia with their newly adopted daughters. They made it onto the plane.

Just before leaving I met with Weija Rotary President, Kojo Amoh, Patrick Sorkpor, Community Project Manager and two representatives of the firm that will train community team members in spraying and conduct the spraying. One of the contractors is a member of Adenta Rotary Club and will encourage his club to be a supporter of the project.  Weija Rotary has created a flyer to be handed out to community members describing what will take place on the day of spraying. And produced T-shirts for volunteers to wear that publicize the involvement of Malaria Partners International and the Weija and Achimota Rotary clubs.  A signboard has been established in Tuba, promoting the project.

On March 27th, community volunteers were trained for the day of spraying.  T-shirts were handed out and can now be seen often in Tuba.  The President of Ghana issued a declaration that institutes a partial lockdown of Accra and Kumasi.  The lockdown began on March 30 and unless extended, ends on April 13.  Upon landing in the US I had a chance to hear the President Nana Akufo-Addo’s speech about the corona virus.  He instituted a lock down in the greater Accra area, Tema, Kasoa and Kumasi.  Vehicle traffic is restricted.  Most businesses are required to close.

What is different from our experience in the US is the level of preparedness.  All people, staff and take-out customers, are required to wash their hands before entering a building.  There are kegs of water and hand soap at each entrance and a staff person making sure that handwashing takes place before someone enters.  The government has testing and PPE equipment and has distributed it.  They are recruiting 1,000 Community Health Workers and 1,000 volunteers.  They have allocated 1 billion cedi to assist individual businesses and small businesses.  (Approximately $173 million).  Many other initiatives were launched to assist people with the physical and economic challenges they are facing.  Because Ghanaian citizens experienced the Ebola outbreak in nearby countries 4 years ago, they are well versed in how to behave and keep themselves safe.

At the end of his speech President Akufo-Addo urged Ghanaians to help each other stating – “The enemy is the virus, not each other.”  And he noted that he would donate the next three months of his personal salary to organizations assisting the needy in Ghana. The measures enacted by the President of Ghana prevent the actual spraying from taking place until the lockdown is lifted.  But training and organization has been accomplished and the project will be implemented at the earliest possible time. Though the lockdown is still in force, the project management team and community volunteers are at standby and will carry out the Indoor Residual Spraying as soon as the restriction is lifted to avoid inclement weather, as the rainy season is due to begin soon.  Because spraying, fumigation, is part of the government’s response to the corona virus, the District leadership is looking at IRS as an acceptable tool and very much in support of controlling malaria.

The Weija Rotary Club and its team members that it has solicited from other Rotary clubs and the community have moved forward with determination, despite obstacles and challenges.    What I witnessed and honor is the resiliency, courage and dedication of Rotary members and community members in Ghana. They are living with and fighting malaria on a daily basis and have been doing so for generations.  Although corona virus has killed over 85,000 people worldwide at the time of this writing, over 425,000 die from malaria every single year, primarily in Africa, the majority of which are young children under the age of five.   It is this tragic factor that inspires Rotary members and a broad variety of nongovernmental organizations worldwide to fight malaria.

May we all stay well and help each other in this time of realizing we are connected to each other. 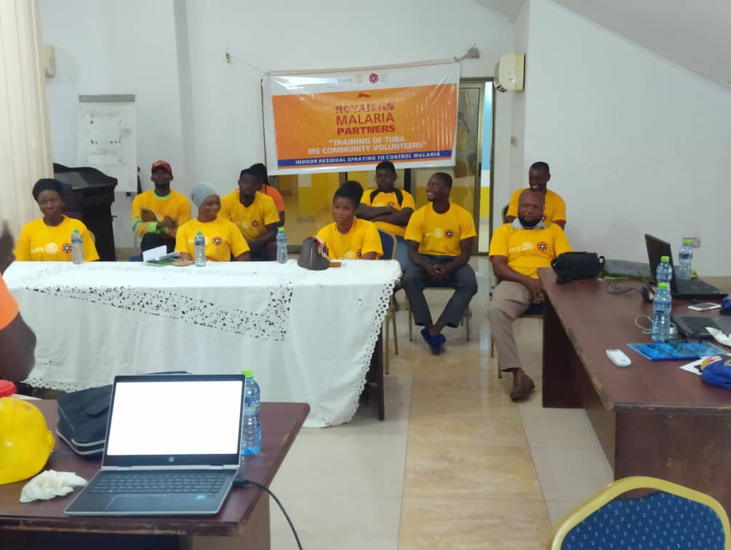